What Is The House of Miniatures by FerryHill.Studio?

Although this website is not affiliated with Houseworks, Ltd (the final owner of The House of Miniatures brand), I did contact the Houseworks administrator at Hobby Builders´ Supply and she said they would have no objection to me operating an informational web site. My name is Colin and I´m a House of Miniatures fan. Below is a photo that shows the extent of my addiction. For me it all started around Christmas of 1977 with a subscription to the monthly kit club. Five of my original kits are in that picture. 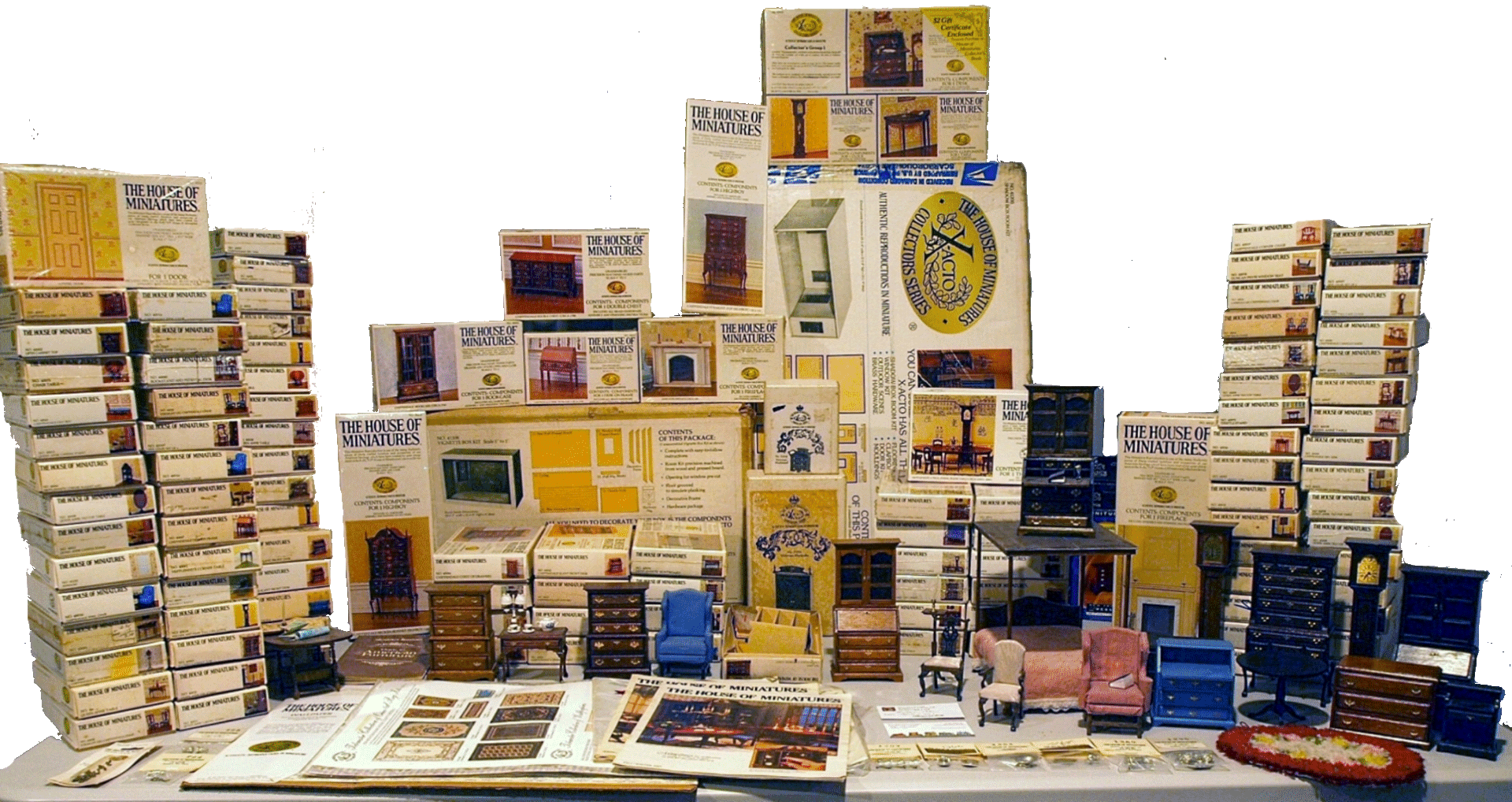 You can interact with me and with other miniatures community members via social media at any of these links:

About The House of Miniatures

The History of The House of Miniatures

The House of Miniatures was started in 1976 and went through four owners in its short life. To confuse the story, the Collector Club was operated by a separate company, which later bought the brand.

I’ve attempted to detail as much as possible of this history, but I have no first hand sources. I keep hoping that I will find people who worked directly for one of the companies who would be willing to share with me a little more of the story. If you have any first hand knowledge please contact me via The House of Miniatures @ gmail.com.

CBS, Inc had a number of media lines and subscription businesses that were ancillary to their radio and TV businesses. I don’t understand what their marketing strategy was, but it appears that these were small, nationwide brands that they promoted with advertising in local markets.

1969 - National Handicraft Institute (NHI), Inc. (mail order handcraft kits) acquired by CBS, Inc. See an example of their magazine ad with their offerings in the Advertisements section below.

1971 - X-Acto, Inc. purchased by CBS, Inc. and based in Long Island City, NY. At that time it was mostly mail order hobby supplies.

1976 - The House of Miniatures line appeared with X-Acto™ emblem, born out of the National Handicraft lines. Both X-Acto™ and The House of Miniatures were located on Van Dam Street in Long Island City, NY, now the site of Middle College High School. The kit of the month club was administered out of Terre Haute, IN, by the mail order house of NHI. By 1977 there were 35 kits, plus other items in the line up and a full line catalog was produced.

1981 - X-Acto™ and The House of Miniatures sold, National Handicraft Institute dissolved. As X-Acto™ became a retail brand it made sense for CBS to sell it to a company that concentrated on retail markets. NHI morphed into a contract mail order house.

In 1980, Hunt Manufacturing Co. began consolidating it’s operations to it’s Statesville, NC headquarters. The paper, office products, and hobby product lines were administered there. Hunt had built it’s business on pencil sharpeners, especially for businesses, and branched out in office supplies and stationary from there.

In March 1981, Hunt Mfg. Co. paid $13.9 million for two properties previously owned by CBS Inc., the X-Acto™ company, which made hobby knives, and The House of Miniatures™ company, which sold dollhouse miniatures via retail and mail order. Both remained in Long Island City, New York for the time being. The Hunt Mfg. Co. name went on the boxes in place of CBS.

In 1983, the Craftmark name (a Hunt Mfg brand) was printed on literature, including a catalog of miniatures, and the address for The House of Miniatures™ changed to Bergenfield, NJ. THoM began offering some of the kit items as fully built, artisan miniatures and introduced their Coronation Series of artisan furniture pieces as high-end collectibles. Craftmark was a succesor to NHI and operated "collector clubs" for miniatures, model cars, thimbles, and other "collectible" items.

In April 1985, Hunt moved its X-Acto™ operations to its Statesville, North Carolina manufacturing facility. X-Acto/THoM address changed to 2000 Craftmark Center and the Hunt Mfg. Co. was still listed on the package. The catalog department was listed as being in Bergenfield, NJ.

Around this time the Craftmark name went on the advertisements, but the NJ address was the same. This was the peak of the brand, listing over 175 different products in the full line. In addition to the kits, THoM catalogs offered many other miniatures, including a line of silver serving dishes from Colonial Williamsburg. They also sold finished furniture items made from the kits, display shelves, glass globe display stands, roombox kits, wallpapers, rugs, etc., and many X-Acto™ products in their miniatures catalogs.

By the end of 1985, after a spurt of acquisitions, Hunt´s revenues had surpassed $100 million for the first time. The following year (1986), Hunt trimmed back its operations somewhat, selling off two divisions, including the costly Craftmark / The House of Miniatures mail-order operation.

When Craftmark / THoM was divested by Hunt Mfg, the Craftmark name went on the The House of Miniatures™ packaging (X-Acto came off) as it eventually moved to Delaware, Ohio. Craftmark operated in Bergenfield, NJ, first as a division of Hunt, then as a separate entity.

It appears that the new company was operated by the group that ran the Collector Club. To continue operations, they bought out THoM and the Craftmark name. They changed the X-Acto™ THoM logo by exchanging the word Craftmark and removing the gold seal effect. No other company info is listed on the boxes, so the new company must have been independent. No more affiliation with X-Acto™, which is still in Statesville, NC.

Craftmark added a line of The House of Miniatures dishes made from poured pewter and dropped many of the second party items from their lines. The furniture offerings didn't expand in the Craftmark logo years and sales declined as the popularity of the hobby faded. Craftmark was principally a mail order company and operated many "collector clubs" that sold hobby kits by subscription, a continuation of the "Fad-of-the-Month club run by NHI in the 1950s through 1970s.

Houseworks Ltd. (manufacturer/wholesaler of miniatures since 1975) bought The House of Miniatures sometime in 1994. The Houseworks name went on THoM packaging in place of Craftmark. Craftmark seems to have folded soon after this. Houseworks, LTD. produced a new catalog for THoM in September and added the Signature Series of precision furniture kits, which never carried the THoM logo, to the same catalog. The Federal and Victorian designs of the Signature Series came from the same designers as the earlier THoM products. There was a separate club for collectors of the new series and both clubs were still administered (initially) out of Delaware, Ohio.

The House of Miniatures name was also used on a line of H.O. scale houses and on a line of 144th scale buildings. The collectors club for the houses was administered by HBS out of Atlanta. Ads appeared in most miniatures magazines in 1995 and 1997 and the houses were very detailed kits. At the time, both the miniatures hobby and the model train hobby were waning in the wake of the electronic toy revolution.

The final address and phone number that THoM had in 1999 ads is now that of Hobby Builders Supply. The House of Miniatures folded into HBS and faded away into the dusty shelves. HBS became the repository of the final inventory. When I looked in December of 2008 I found that miniatures.com still had ten different kit designs in stock, a total of 8882 kits on hand! And all were on clearance at 40% off of the 1994 prices. I asked for and received written permission to create this website dedicated to the memory of the brand. By the end of 2013 there remained only a few leftovers in stock at HBS, listed under The Chippendale Collection, which also seems to include several new furniture kits.

Inquiries to Houseworks, Ltd. for more information about THoM in 2018 were met with shrugs and the note that the lady who might know anything about that had retired. The House of Miniatures has officially faded into the pages of history.

Will The House of Miniatures ever rise from the ashes? I don’t think the miniatures hobby will ever again be as popular as it was in the 1970’s and ‘80’s. It is possible that 3D printing may lead to a resurgence in miniatures hobbies, and I can see there being interest in kits printed to follow the old designs. So, that’s a definite maybe. But you could build many of the kits with basswood stock using the instruction sheets that come in each box if you wished.

On the other hand, there may be enough kits in existence to satisfy the demand for ten or twenty more years. And if pandemics are the way of the future (COVID-19 caused a huge resurgence in the popularity of handicrafts), we may see the miniatures hobby make yet another resurgence in popularity.

This historical info is incomplete. Can you help with further research? I'm intersted in articles, documents, or first-hand accounts. Please contact The House of Miniatures @ gmail.com.

The House of Miniatures (THoM) by Ferry Hill Studio exists to promote the venerable hobby of miniatures making. Crafting miniatures brings people from all walks of life together and sparks youthful joy in all ages. THoM seeks to remember and support the vintage brand of furniture kits by providing brand, historical, and crafting information, kits, finished pieces, parts, and instructions for everyone who still loves the brand. We love the products and the memories attached, and want to help others enjoy miniatures as much as possible.

This web site is owned and maintained by FerryHill.Studio as a service to the Miniatures hobby. Please see site Terms of Use and Privacy Policy. Contact me via email at The House of Miniatures @ Gmail.